Royale Bazaar​-- Is a major recording artist and founder of ​the Brooklyn Bazaar Festival celebrating the strength, creativity, and vibrancy of the Brooklyn community by gathering some of the borough’s greatest visual artists, musicians, chefs, restaurateurs, businesses, and community organizers. The progressive festival features an eclectic range of artists and special guests and with his creation of Ghetto Metal he has melded hip-hop, rock, soul, blues, spoken word, and reggae.

Royale Bazaar was discovered by Devante Swing of the group Jodeci where he wrote and produced songs as a member of the group “The Basement” which consisted of Timberland, Missy Elliot, and Genuine.  The Basement became the blueprint for music in the ’90s.

In 2000 he continued to write songs while securing a record deal with Sony Music which garnered a new era for Royale Bazaar as DMX hand-selected him from the Def Jam label to become the first artist for DMX’s “Bloodline” label. 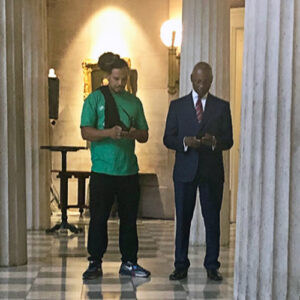 As an actor he appeared in the movie “Cradle to the Grave” with Jet Li, television productions of “3rd Watch, The Eve Show, Half & Half and the David Chappell Show.

During this time he held a residency at S.O.B.'s in NYC sponsored by The​ ​Source Magazine.

His dedication to the industry has propelled him into the spotlight as a fledging artist respected and mirrored by many who admire and support the footprint he has set upon the music industry.

He has received a Congressional Award from Congressmen Hakeem Jefferies for recognition of outstanding and invaluable service to the community and a Proclamation from the Brooklyn Borough President, Eric Adam.

Throughout all his ventures he has stayed true to his commitment to make a difference within the community and to continue to impress upon all, the importance of bringing together those that can foster a positive element in the lives of each other.